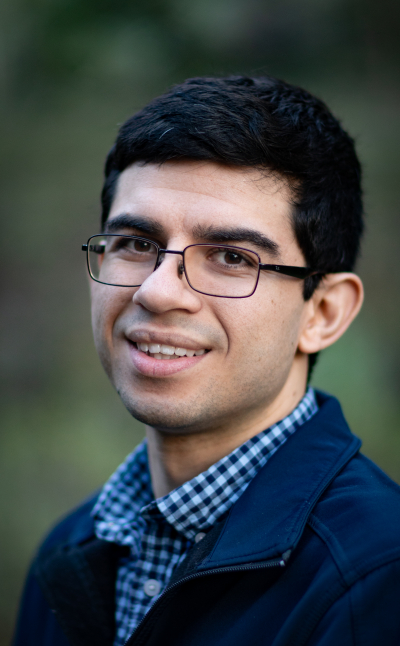 Ivan Moreno-Hernandez is an assistant professor of chemistry who joined the Duke University faculty in 2022.

In a sparsely decorated office on Duke’s west campus, new chemistry professor Ivan Moreno-Hernandez presses play on a video. It’s an action movie at the nanoscale.

“It's hard to do this research justice without showing at least one video,” he says.

If you could shrink down to a few millionths of an inch tall and watch the inner workings of a rechargeable battery, or a fuel cell for an electric vehicle, this might be what you would see:

Tiny atoms -- the basic building blocks of matter -- build up, layer-by-layer like neatly stacked apples, to form a thin film on the surface of a metal nanocrystal with the help of an electric current: a plating process used to make some high-performing batteries.

In another movie, Moreno-Hernandez watches platinum nanoparticles more than a thousand times smaller than a grain of sand as they dissolve -- data that can be used to make better catalysts for fuel cells.

The new assistant professor has been making these movies by peering at samples under an electron microscope and taking snapshots over time, using a technique called liquid cell TEM. What makes the technique so useful is its ability to visualize chemical reactions in liquids as they unfold, in unprecedented detail.

Moreno-Hernandez hopes his research on the tiniest scales will help tackle one of the weightiest challenges of our time: powering the planet.

Every day, people around the world nonchalantly flip on lights and crank up air conditioners, turn on their washing machines and plug in their phones. Worldwide, it takes more than 550 exajoules per year to power our cars, homes and factories. That number is expected to grow by nearly 50% by 2050, driven by economic and population growth in developing countries.

The challenge is to meet growing energy demand without exacerbating global warming, Moreno-Hernandez says. For him, that means learning how to make new materials that harness clean energy.

Currently, about 30% of the world’s electricity comes from renewable sources such as solar and wind. But solar panels and wind turbines do little to help when the sun isn’t shining or the wind dies down.

To navigate the transition from fossil fuels to renewables, we need more efficient ways to convert wind and solar power into storable energy for later use and vice versa. Take batteries, which use chemistry to store energy produced by renewables and then convert it to electricity on demand. Or electrolyzers, devices that use electricity from renewables to split water into oxygen and hydrogen gas, often seen as the fuel of the future.

These technologies offer a solution, but various factors can limit their performance or shorten their lifespan. Moreno-Hernandez says that’s where his research comes in.

“We want materials that are very efficient and that work for a long time, but practically, in the field, we don't have that,” he says. “That's why renewable energy hasn't completely taken off yet.”

“So we want to understand, at the nanoscale, why some materials work and others don't.”

The microscopes he uses to do this, at Duke’s Shared Materials Instrumentation Facility and elsewhere, are huge -- they take up an entire room. They work by firing a beam of electrons through a sample to form a magnified image. Because electrons have wavelengths that are many thousands of times smaller than the wavelength of visible light, they can resolve much finer details than standard light microscopes can.

The research has its challenges. One, Moreno-Hernandez says, is that the electron beam of the microscope can change the chemistry of liquids, causing unintended artifacts. His focus in recent years has been on developing ways to control beam effects in the microscope, to study reactions and synthesize nanomaterials with more precision.

“I'll provide a lot of information that is important to understand how those changes occur, and more importantly, how they can be controlled to obtain a more stable or active material,” he says.

Moreno-Hernandez showed interest in science and engineering from an early age. He remembers his first computer, when he was around 12. Without an instruction manual he figured out how to disassemble and rebuild it.

“Every single screw; everything that wasn’t soldered in place I took apart,” he says. “And then I put it back together, and it still worked.”

His family moved around a lot during his childhood, from his birthplace in southern California to a dairy farm in western Mexico before eventually settling in Nebraska.

He earned his undergraduate degree in physics and chemistry at the University of Nebraska-Lincoln. From there he went on to pursue a chemistry Ph.D. with Nathan Lewis at the California Institute of Technology, where he worked on discovering new catalysts for chemical reactions involved in clean energy conversion and storage, wastewater treatment and other applications.

After finishing his Ph.D. in 2019 he did postdoctoral research with chemist and nanomaterials expert A. Paul Alivisatos at the University of California, Berkeley, before joining the faculty at Duke this summer.

Moreno-Hernandez says his research and teaching philosophies are shaped, in part, by the fact that he is the first in his family to go to college or receive a Ph.D.

“As someone who’s first generation and Latino, sometimes it's hard to see people from my background in academia,” he says. “I want to serve as a mentor for others in that regard.”

Making academia a more welcoming place for diverse scholars takes on a special urgency when it comes to the climate crisis, he says.

“If you want to find a solution for climate change, it will have to be implemented by literally everyone in the world, from all countries, all backgrounds, all mindsets,” Moreno-Hernandez says.

“It's going to take a lot of effort from a lot of people. I think it’s important to acknowledge the contributions of all of society.”

When he’s not teaching or in the lab, Moreno-Hernandez enjoys cycling and hiking. He lives in Durham.