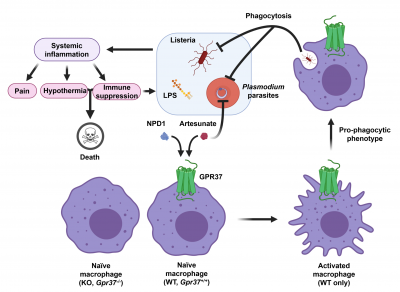 Recent work from the Ji (Department of Anesthesiology at Duke) and Derbyshire labs has led to the unexpected discovery that artesunate, a front-line antimalarial, confers protection against infection-induced sepsis and pain-like behavior in mice. Artesunate has been used for decades in the clinic, and while its potent anti-plasmodium activity has been widely studied, little is known about its interactions with host cells. While studying the possible role of the human orphan GPCR GPR37, they found that GPR37 agonists may help treat sepsis and infections by diverse pathogens, and revealed an unexpected interaction between artesunate and host cells.  Read more about their exciting findings in Nature Communications here.