In addition to coding for proteins, RNA molecules play direct functional roles in cellular metabolism, including the regulation of chromatin architecture and the regulation of gene expression at the transcriptional and translational level. Due to their many roles, RNA molecules have been implicated in the progression of cancers, neurological and infectious diseases. As a result, RNA is being pursued as a potential drug target for many indications. The better pharmacokinetic properties and cell delivery profiles of small molecules, as well as their non-immunogenicity, makes them a more attractive option for targeting RNA compared to antisense- and peptide-based technologies. However, despite several emerging examples of small molecules that target RNA selectively in the cell, RNA drug discovery remains challenging. For example, although the discovery of small molecule properties that allow selective targeting of certain RNA topologies would expedite RNA drug and probe discovery, such investigations may suffer from the lack of novel small molecule libraries.

Towards the expansion of small molecule libraries available for RNA ligand discovery, in this work we developed an approach that allows rapid tandem synthesis and screening of a large number of novel small molecules against an RNA of interest. Specifically, we used imine-based dynamic combinatorial chemistry, which allows template-guided assembly of ligands from aldehydes and amine building blocks. In a proof-of-concept study, we demonstrated the feasibility of imine-based dynamic combinatorial chemistry approach on a known RNA-binding scaffold. Additionally, we discovered guiding principles for increased reactivity of aromatic amines towards reductive amination in buffer. This information is critical in ensuring that a high percentage of the expected library members can indeed be accessed in aqueous conditions. Finally, we observed that bicyclic amines led to increased RNA-binding of the amiloride-based library, supporting the potential of this method to identify preferred chemotypes for different RNA topologies.

In subsequent studies, we designed three 120-member libraries utilizing relatively simple commercial aldehydes and amine building blocks. To test the applicability of this method to RNAs with complex 3D architecture, we tested the libraries against a three-way junction RNA from the HIV-1 genome packaging signal. Hit compounds identified in this screen were independently synthesized and shown to have higher RNA-binding activity compared to non-hits.

Our results show that imine-based dynamic combinatorial chemistry is a promising tool that can enable rapid discovery of ligands for RNAs with a range of size and 3D complexity. This capability will in turn expedite our understanding of small molecule properties that lead to preferential recognition of various RNA structural motifs. 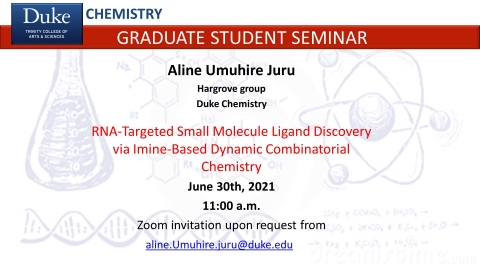